What is the Ultimate Survival Knife?

So, what is the Ultimate Survival Knife? Growing up in the 1980s, every kid wanted a “Rambo Knife”.  Oh, man! It was the coolest knife.  You could fight off a whole army with that knife, cut through barbed-wire fences, sew yourself up from a gunshot wound, etc, etc.  When they finally hit the market, they were called, “Survival Knives” and everyone immediately went down and bought one.  The problem was’ we could never do the things Rambo did with the knives we got.  They were actually complete junk as far as knives go.  Of course, we just attributed this to them being, “Cheap Chinese Knock-Offs”, and not the real thing.  Yeah, that was the reason they were junk.  It had to be, right?

What I learned about a survival knife from the Native Amazonians

Later on in life, I went to live with a tribe of Native Amazonians (Amazon Indians).  Now, if you want to talk about TRUE survivalist, these were them.  These people could do things with knives that would blow your mind.  In fact, their whole existence revolved around knives.  Surely they know what the ultimate survival knife is, right?

It became very clear to me, that a knife to them, was the difference between living in the stone age and living in the iron age.  Many of the Amazonians I knew had actually lived before the time their tribe had steel knives and told me about the extreme hardships they faced trying to survive without a steel knife.  Some had even risked their lives to come out to civilization to try to find a steel knife.  Thes people’s lives depended on having a good survival knife.  It was the most vital thing to their existence.

Now, I bet you are waiting with bated breath to know exactly the type of knife these Amazonians used.  Right?  Just wait a little longer, I will tell you.  But before I do, I want you to understand that the knife these people used is extremely special and impossible to get in the USA.  To me, it is the best knife on earth and I still use it daily and will never be without one.  I have used this knife for over 30 years and never found a match for it.  I have imported limited quantities to the US and given them out to my friends, who cannot sing enough praises about this knife.  They love it.

Are you ready?  Here is the survival knife that every Amazonian I know of uses to survive in the Amazon jungle.  They use this knife for everything, fishing, hunting, building houses, making canoes, bows and arrows, etc, etc, etc. 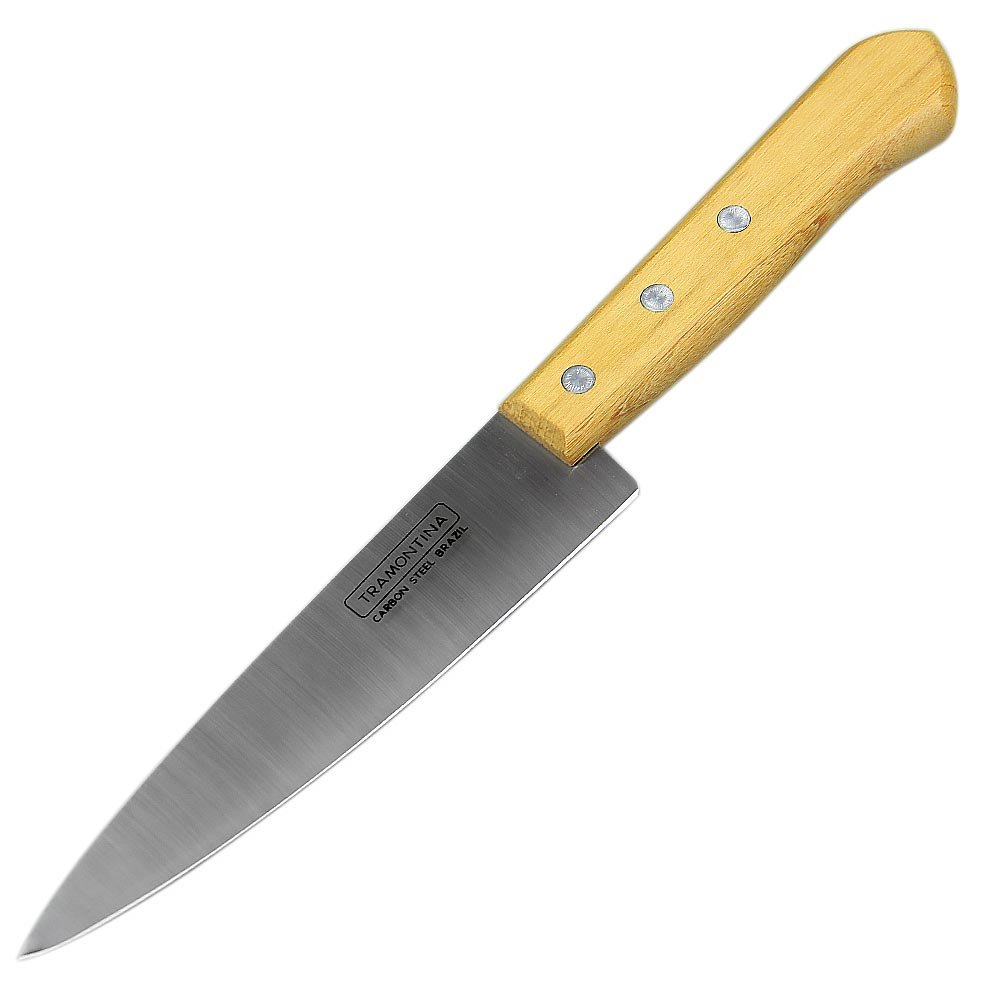 Now, you are like, “WHAT is that?”  It is exactly what it looks like. It is a chef’s knife.  But it is not just any chef’s knife, it is an 8″ high carbon steel chef’s knife.   “Carbon Steel,” you say, “Won’t that rust?”  Yes, it will.  So, now you are confused.  I spent all that time building this knife up and you thought you were going to see some amazing knife created with the most advanced technology and engineering.  But instead, I show you simple carbon steel, wooden handle, chef’s style knife.  So what makes this knife SO SPECIAL?

Have you ever heard the phrase, “It is the simple things in life that truly matter”?   Well, that is the case here.  When it comes to survival, it is the simple things that are the best.  This knife is simple.  It is also extremely cheap to buy.  You can buy a box of a dozen for about $10.  Did you expect dirt poor Amazonians to be able to afford to pay $100 for a knife?  It is made out of high carbon steel, which makes it easy to sharpen on any rock.  If you can find a flint rock, you can use it to start a fire.  It is lightweight and has no moving parts to break.  The chef’s knife design provides for flat cutting and finger protection.

This knife comes in many sizes, from 4″ to 12″, but the most common size used by the Amazonians prefer the 6″ or the 8″.  So, it smaller then what you would think it is.  Here is a picture of me holding a 6″ version. 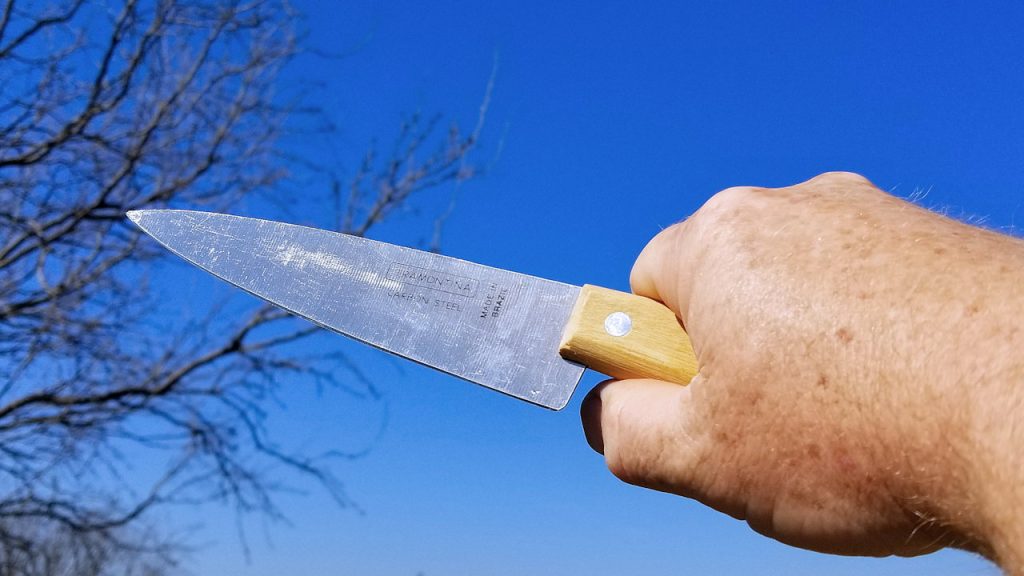 The thing that makes this knife so special, is its raw simplicity and effectiveness.  Its shape and size also play a part.  This knife is called a Peixeira in Brazil, which means, Fishing Knife.  The knife is so effective as a stabbing instrument, that it has been made illegal to carry on the street.  More murders have been committed with this knife in Brazil, than any other weapon. But since this knife cannot be had in the US, let me talk about what I use here in the US.

What Survival Knife do I carry in the U.S?

So what is the ultimate survival knife?  Well, it is the knife you have with you when you need it.  I do not carry the above Amazonian knife around with me in the US, because, well, it would just look weird to carry it here. I use it every day in my house for cooking and for fishing and hunting, but I don’t carry it to church, to the store or to a restaurant.  Here in the US, I have different needs than in the Amazon jungle.  I have a need for tools on a daily bases working around my farm. So I need a different style of survival knife here.  One that has the things I need on a daily basis.  Remember, a true survival knife, “Is the one you have with you when you need it.”

I actually carry two different knives here.  These are extremely useful knives (if you can call them that.)

My primary carry knife is the Leatherman  CRATER C33T 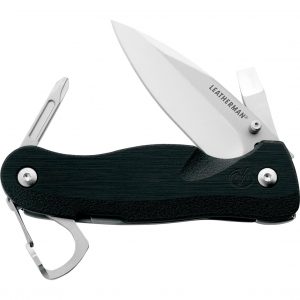 This knife is made out of one of the best stainless steels I have ever used.  The on-board tools are also some of the best I have used.  I will never go anywhere without this knife in my pocket. 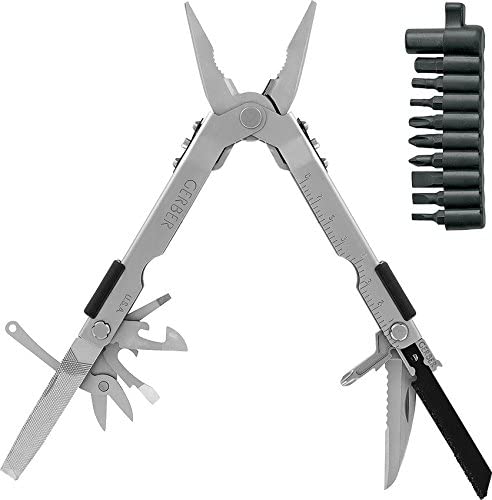 I have used many multi-pliers in my life and none of them came anywhere close to the usefulness and quality of these.  These things are built to last and come with a lifetime guarantee.  I have never been able to break them, so I have not had to use the guarantee yet.  Combined with my leatherman pocket knife, I a prepared for just about anything the day can throw at me.